What I’ve been building since leaving Google

I’m building Hyperlink — an app that allows you to create links that send you push notifications when someone taps on them. I see this as the first step in building an analytics platform for the next generation of entrepreneurs that are living their lives and building their companies on their entirely on their mobile devices. It also has an API that allows you to send yourself push notifications programmatically with 3 lines of code.

What I’ve been up to

Since leaving Google, I’ve been building and launching a series of experiments. The purpose is to get something in front of users as quickly as possible to gauge interest and get feedback.

The first experiment was an iOS game called Read My Lips. The hypothesis that RML was testing was that the release of the Snapchat’s API would be the platform’s “FarmVille moment” creating an opening for a handful of social games to grow virally (the way that YOLO was able to). I put together a little deck on the opportunity I see there.

Having the app out in the wild for a few weeks, it seems that users are far more interested in playing the “single-player” game mode than the “multiplayer” game mode — which would give the app the network effects it would need to grow virally. This seems pretty inline with what you’d expect from the 1% rule. The app is currently at around 500 MAUs with no press or paid marketing. Here’s a graph of daily, weekly, and monthly actives:

Having felt the wrath of the 1% rule, but still wanting to explore the viral potential of the Snapchat API. I built a small demo for an idea called EmojiPets. The idea was that, like my childhood obsession Neopets, you could create and customize a pet that could be shared on Snapchat (and Instagram once their swipe-up feature exits closed beta). When shared on your story, your friends could “Swipe up to pet” your pet. You’d earn “EmojiPoints” when your friends pet your pet which could be used to train and customize your pet.

Feedback from friends when sharing my pet on Snapchat was encouraging. I think this idea has potential, but I think the road to monetization would be a long one. 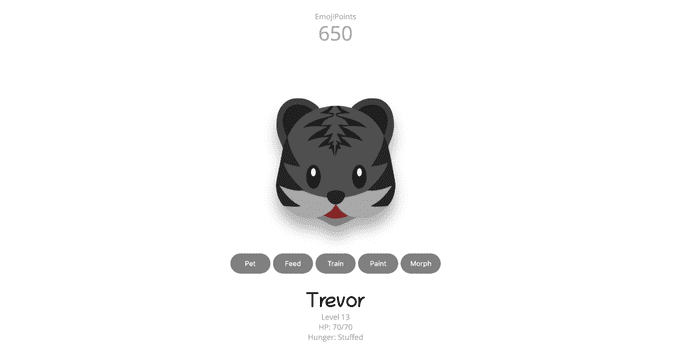 At first I was going to fix this “bug”, but soon I started to glean information that I wasn’t getting when looking at Google Analytics, or even examining logs data. I noticed there was a particularly difficult challenge early in the single-player flow. I saw that if users completed this challenge, they would continue on and complete dozens more challenges. For other users, I’d get a few push notifications, and once they hit that challenge — silence. I removed this challenge and challenges completed per user spiked.

This insight would have been possible to get through a traditional analytics tool like Google Analytics, but it would have required a lot of digging and initiative. Instead, the problem was right there staring me in the face — impossible to ignore.

I built and launched Hyperlink 10 days ago and so far it’s grown to 82 MAUs without press or paid marketing. I’ve got users in Kuala Lampur marketing their Whatsapp groups and a user in Krasnodar, Russia marketing their wedding photography business. I believe strongly that the next generation of entrepreneurs will use phones, not desktops to run their businesses. They will do their marketing on Instagram, sell their products on Shopify, and use Hyperlink for their analytics.

So Hyperlink is out in the wild. I’ll continue to iterate, adding the features that users ask for. I’ve built a subscription product that allows you to use Hyperlink with a custom domain for $10 / month. I’ve also built an API that allows you to send yourself push notifications with 3 lines of Javascript. My friend (and my Tailor co-founder) Tyler already built a simple unix filter that sends you a push notification when your long-running jobs are finished using the API.

The product roadmap includes support for sending notifications to Slack channels, SMS, and email. I also have a concept that I call a “HyperApp” which could turn a static HTML page into something much more dynamic using the Hyperlink API.

I also plan to publish a series of “how to” articles that explain using Hyperlink for some common use-cases that people are searching for on Google. The first one I have in the works is “How to get a push notification when someone taps on your Instagram profile link”.

Finally, I’ve incorporated! I’ve officially setup a Delaware C Corp using Stripe Atlas and applied for $20,000 of GCP credit through Google Cloud for Startups (if you’re an ex-Googler, reach out and I’ll fill you in on how to get a bunch of discounts on both through Xoogler.co). Because I’m iterating quickly, I didn’t want to tie myself down to the name of any particular product, so the name of the corporation is Iteration, Inc.